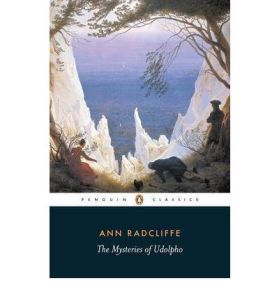 The Mysteries of Udolpho is described as a Gothic novel.  It is filled with villains, mysteries and castles.  It has lashings and lashings of melodrama.

It is important to remember that it was written over 200 years ago and that the audience had very different expectations of entertainment than we have today.  But, only twenty years after The Mysteries of Udolpho was written, so was Pride and Prejudice and the difference between the quality of the two could not be more distinct.

Ann Radcliffe seemed to be interested in three things:

Pages and pages of the 600 are dedicated to setting out the prerequisites to a happy life.  And this comes back to avoiding the temptations provided by big cities, being benevolent and living quietly without ambition.  The first 50 odd pages of the book sets out how Emily and her family have achieved this.  I found it repetitive and sickening.  The impression was quickly formed that Emily was the author’s ideal of womanhood.  I did not need it repeated ad nauseam.

The plot.  A lot happens in the plot.  A lot.  I’m not going to try to set out the plot in any detail.  At a very high level.  Emily meets the hero Valencourt; both her parents die; she comes under the guardianship of her Italian uncle who owns the castle Udolpho.  They travel to Venice and the Italian uncle tries to marry her off to a Count.  Then, suddenly, she is whisked off to Udolpho and confronted with a range of badly behaved men and a range of mysteries and trials that would shake the resolution of a lesser woman.  She manages her way through her tribulations with tears and fainting fits. Her troubles are increased when it becomes apparent that Valencourt is not worthy of her admiration and love.  Despite a lot happening, the only interesting part was in Italy, which is the central third of the book. The parts in France take several pages to say nothing at all.

Finally, the scenery.  I tried to remind myself while reading the scenery sections that the book was written during a time without TV’s, cameras or magazines, let along travel that was affordable to the masses.  Therefore reading descriptions of scenery was the only way that many people could experience it.  I estimate that 20% of the book is devoted to scenic descriptions.  It is overwhelming.

I knew before I started this book that Emily was a watering pot and not a modern woman.  Her main weapons are tears and her integrity.  Consistent with the theme of the book, the integrity enabled her to come out on top.   I couldn’t even detect a hint of intelligence.  She has an annoying habit of being vague rather than specific that repeatedly creates issues.  She also makes ridiculous assumptions.

Many of these bad habits are obviously plot devices.  This was probably my biggest criticism, that I found the writing clumsy.  I did not consider it to be a well written, well structured novel. Emily would find out things that weren’t revealed to the reader; or the solution to a mystery was completely unrelated to the main plot, just a simple solution to a mystery that didn’t actually contribute to the story in any way at all.  Disappointing.

Here’s the thing.  I don’t think that Mysteries of Udolpho deserves its place on the list. And I would only recommend it to people interested in literature of that period such as Jane Austen aficionados.

3 thoughts on “The Mysteries of Udolpho – Ann Radcliffe”