Today you are getting a bonus – two books from the list, plus a spare, for the price of one.  Enjoy! 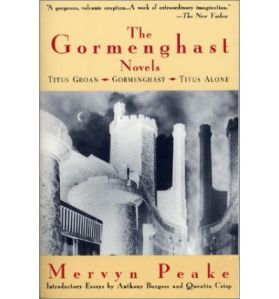 I had never heard of ‘Gormenghast’ before it featured on the BBC Big Read Top 200 list, and even then, I had no idea what the novel was about. When a fellow reviewer offered commiserations over the fact that I was going to attempt it, I was a bit wary, but nonetheless, I decided to give it a go. When my copy arrived from The Book Depository, and it turned out I’d ordered a trilogy, I realised I was going to either have triple the fun, or triple the misery.

Sitting somewhere on the fantasy spectrum (although unusually so, as these novels feature no magic, no fantastical creatures, just strange and wild humans), Mervyn Peake has created a world unlike any other inhabited by humans. It’s as though he’s combined an ancient world with a futuristic one; the man’s imagination was certainly a wild one, with more than a touch of madness thrown in for good measure.

‘Titus Groan’
Young Titus, the long-awaited seventy-seventh Earl of Groan, is born into a family controlled by a long tradition of rituals and customs. From the moment he arrives, every action is governed by a pre-determined set of rules; rules which Titus very quickly desires to flout. From the very start, it’s apparent that the characters – the inhabitants of Gormenghast Castle – are a quirky, crazy bunch. Sepulchrave, the seventy-sixth Earl, is obsessed with his library of books, and descends into madness following a fire which destroys every volume. His wife, Gertrude, is surrounded by swarms of white cats and birds, and appears to love them more than her own children. Titus’ sister, Fuschia, is a moody young girl who comes to love her brother as they bond over the madness of their family. Flay, attendant to Sepulchrave, is consumed by his love for the Groans and Gormenghast, and his fatal hatred of the fat cook, Swelter. Steerpike is the young kitchen apprentice with evil designs on the running of the castle; his mastery of Sepulchrave’s gullible twin sisters leads to their ultimate destruction.

‘Gormenghast’
The second book follows Titus as he grows from a boy of seven to a young man of seventeen. From an early age he dreads the pre-ordained ritual that governs every aspect of castle life. His desire for freedom is all-consuming, and he makes various attempts to escape the castle; however, he always returns to his sister, with whom he has developed a strong and loving bond. When Steerpike is eventually unmasked as traitor and murderer, a timely flooding of the castle leads to his death at the hands of Titus. The death of the novel’s main protagonist means Titus is free to reign over the castle, but his desire to leave is so strong that the end of the novel sees him determined to leave.

‘Titus Alone’
The final in the series, this novel was completed and edited after Peake’s death, but if you didn’t know this, you wouldn’t be any the wiser – the editor has captured Peake’s imaginative style (and therefore the main characters’ madness) perfectly. It follows Titus’ abdication from his family home and his role as Earl of Groan. He flees from Gormenghast and finds himself in a foreign land where no one has heard of Gormenghast, or can tell him how to get back there. Through meetings with another bunch of insane characters and unlikely situations, Titus begins to doubt his own history and questions his own sanity; his seeming descent into madness mirroring that of his own father. The overriding impression is that Gormenghast is lost in the past, among traditions and rituals the origins of which have been long-forgotten; the contrast with the advanced city in which he finds himself alludes to this.

Did I enjoy the trilogy? I’m not sure. I’m glad I persevered, and I didn’t hate them, but I certainly breathed a sigh of relief when I turned that very last page.

Am I quietly stoked that I made it through? Most definitely, especially as I finished the second two while nursing my newborn son. Perhaps slight sleep deprivation and the subsequent descent into madness myself served to enhance my appreciation of Peake’s works??

Would I recommend you read them? Um…it’s doubtful. Not because I have any strong dislike of them, but because I (a) don’t want you questioning my own sanity, and (b) am well aware that these novels are a bit like Marmite: you either love it, or you hate it. These are the kind of books you recommend to very close friends only, because you know they won’t hold it against you if they don’t like them.