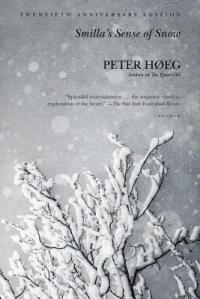 Smilla Jaspersen thinks more highly of snow and ice than she does of love. When her six year old neighbour falls to his death she is convinced that his death was the result of foul play and not an accident as the police believe. As a Greenlander, Smilla has always felt at odds with her new home in Denmark, and she is lead back to the icy frontier of her roots as she begins to unravel the mystery surrounding the boy’s death.

This book is hard to categorise, and describe. At times it sweeps the reader away on achingly beautiful and poetic descriptions, there’s a real sense of atmosphere – ice becomes a character of its own, and the cold seeps out of the pages. And then in the turn of the page there is a clunkiness to the prose that grates and made me feel like something had been lost in translation. (The book was originally written in Danish).

Smilla is at turns, provocative, with an inner strength that is admirable as she hunts for the truth, and then at other times her motivations are a mystery, or she utters something that seems just plain… odd. She portrays a sense of aloofness, a disconnection with the world around her which at the beginning was interesting, but by the end I felt like her voice had been lost a little. The plot too, at this point seemed to ramp up to ‘the big reveal’ only for it to feel forced and the ending rushed and incomplete.  I also remember feeling this way about the film adaptation that I watched many years ago – there is very little I remember about the film actually (except that Gabriel Byrne starred) but I do recall a sense of disbelief that the ending ‘went there’.

That being said, the setting was incredibly fascinating. The ‘sense of snow’ was incredibly evocative and exotic. We, in New Zealand, have one word for snow – the Inuit people have so many – Smilla’s gift for the ice was probably the thing that held the book together for me. I didn’t know anything about Denmarks’s relationship with Greenland and the issues globalisation has caused there – so that too was something I enjoyed learning more about.

I have a suspicion that this book will linger in my mind for a long time, but I don’t think I will be rushing to reread. I gave it 3/5 stars.

One thought on “Smilla’s Sense of Snow – Peter Hoeg”