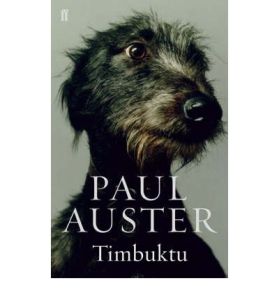 Timbuktu is a novella that runs to 186 pages and is my second Paul Auster.

The main character is a dog, as you can see from the lovely cover chosen to go with this review.  His name is Mr. Bones.  He is of the multi-parental background, otherwise known as a mutt or a bitzer.

We meet Mr.Bones and his master, Willy G. Christmas, as they make their final trip together to Baltimore.  Willy is dying and his final wish is to see his old high school English teacher so that his years of writing are not wasted and at the same time attempt to secure a home for Mr.Bones.

The first half of the book is devoted to discovering how these two characters come together as dog and master, exploring Willy’s promise of youth only to then fall prey to a drug induced ‘flip out’, thereafter becoming a part-time tramp and a part-time poet.  One night the television starts to talk to Willy, and he transforms himself from William Gurevitch, son of post-war Polish immigrants, into the spirit of Christmas.  And Mr. Bones joins the family.

We find out all about Willy’s musing on life, the potential of his dog, and Timbuktu.  Timbuktu being the place one goes to after one dies.

That was where people went after they died.  Once your soul had been separated from your body, your body was buried in the ground and your soul lit out for the next world.  Willy had been harping on this subject for the past several weeks, and by now there was no doubt in the dog’s mind that the next world was a real place.  It was called Timbuktu, and from everything Mr. Bones could gather, it was located in the middle of a desert somewhere, far from New York or Baltimore, far from Poland or any other city they had visited in the course of their travels.  At one point, Willy described it as “an oasis of spirits.”

And so, when the time finally comes for Willy to pass out of this life and head on over to Timbuktu, Mr. Bones is left to fend for himself.   In the first instance he comes across a young Chinese boy, Henry Chow, who longs for a pet but is not allowed one.  The dog’s constant thoughts turn to imminent death, following Henry’s feeding him a feast of McDonalds :-

Run away from this, he told himself, and you’ll die in the streets.  Go home with him, and you’ll die there too.  But at least you’ll be with Henry, and if death is everywhere, what difference does it make where you go?

This musing comes from Willy telling Mr.Bones not to go near Chinese restaurants for fear of being made part of a meal.  But being with young Henry kept his stomach full, although his mind inclined to dwell on Willy’s comments.

Willy’s prejudices had become his fears, and as he bit down on the obscure new concoction, he couldn’t help wondering if he was eating a fellow dog.  He would stop chewing then, suddenly frozen with remorse, but it was always too late.

His time with Henry is short, until the end of summer, when he is chased off by the very pet-unfriendly Mr Chow.  After running for three days he ends up with a suburban family with issues of their own.

I would love to share the final line of the book with you.  It’s quite a doozy, but it would give the ending away.

The first time I read the book I enjoyed it, but didn’t read so much into all of the musings on life after death and do dogs have souls (and do we, for that matter).  I think it is up to you whether you simply enjoy the story of one dog and his master, or whether you take on board Auster’s deeper and more philosophical ideas.
As for his writing style, it is quite simple to follow along and in parts reminded me of Thurber’s poetical ways of writing.  The main difference being the tone.  Thurber I found to be light, refreshing and invigorating to read, Auster is dark and edgy and less pleasant despite being very clever.

It darts and dives at you, keeps churning away in your head until it all melts down into a big buttery ooze.  Vasco da Gama in his puffy pantaloons.  FDR’s cigarette holder. Voltaire’s powdery wig. Cunégonde! Cunégonde!  Think of what happens when you say it.  See what you say when you think it.  Cartography. Pornography. Stenography. Stentorian stammerings, Episcopalian floozies, Fudgicles and Frosted Flakes.

Personally I didn’t find this story stayed with me after I had read it and had to re-read it to write this review.  Perhaps that says more about Timbuktu than the rest of my review put together.  I don’t think you will regret reading it, but I’m not sure that it will make an indelible mark either.

One thought on “Timbuktu – Paul Auster”