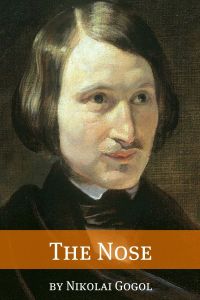 Welcome to what is likely to be the shortest of the 1001 Books reviews.  The Nose by Nikolai Gogol, in the edition of his tales that I have, is a whole 23 pages long.

That makes reviewing it rather difficult and rather simple in the same breath.  Here is my précis of the story.

We begin by meeting a working class barber, Ivan Yakovlevich waking up and having breakfast.  He asks his wife for the freshly baked bread, which he proceeds to cut in two.  On cutting it and examining the inside of his half he finds a nose.  Not just any nose, but that of a regular client, a Major Kovaliov.  Horrified, and unable to remember if he had pulled or cut his client’s nose off he heads out to dispose of it.

We then shift to the story of the now noseless Major.  He wakes up with a flat pancake face right where his nose should be.  Through this narrative we find that the nose is living a life of its own and is unwilling to return to the Major’s face.

I won’t tell you what occurs in the last section of the story.  It is short, but you might as well have some sort of “unknown” ending should you choose to read this.

It is certainly the strangest tale I have read to date.  Frankly I had to turn to Wikipedia to even have a clue as to the underlying ‘meaning’ of it all.  I was struggling to find one.  It is satire.  For those with no real connection to Russian literature and culture this went mostly over my head.  And in the translation that I read, the Major does not wake up from a dream (which is a possible version you may encounter), and therefore it is considered to be a precursor to magical realism.  Well, a nose with a life of it’s own, masquerading as a civil official?  Certainly is the impossible occurring within the confines of an otherwise reasonable story.

It does, apparently, have potential themes around castration, impotence and similar.
Fine.
I suppose if I sat and squinted a lot I could make that connection.

I cannot genuinely recommend this, but then again, at around an hour of reading time perhaps you won’t mind making the effort.  If you do, or if you have a much greater understanding of the Russian idiom and culture, then please come back and explain it to me.  I’d like to know what I spent my irreplaceable hour on.  Thanks.

One thought on “The Nose – Nikolai Gogol”