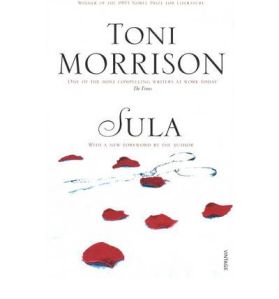 Sula is the first book by Toni Morrison that I have read and I’m certain it won’t be the last.

Covering the period following the First World War up until the mid 1960s, we are introduced to Sula Peace and her best friend Nel Wright.  We follow them from their girlhood through their family’s experiences and through to death.

The setting is the Bottom, a hillside settlement of blacks above the white valley town of Medallion.  We are introduced to three generations of the Peace family, grandmother Eva, mother Hannah and Sula, herself.  We are also shown briefly into Nel’s family as a counterpoint.

It is a brutal story of poverty, the strength of black women and just how far they will go for themselves and their families.  It shows pain, not so much overcome as accepted alongside happiness.  It shows what that sort of struggle can do to a young woman’s personality.

Sula and Nel become friends at around 12 years old.  They are almost as one.  They share experiences, feelings and grow up together as an outlet away from their respective homes.  Then, one day, a dreadful accident happens and things change.

Nel stays in the Bottom and marries.  She raises a family and takes the conventional road, in keeping with the way her mother did before her.  Sula leaves the Bottom and goes off to college, only returning after experiencing many cities across the country.  She is at best, unconventional and at worst, provocative.

I found the subject matter and the story to be hard reading.  It is often confronting and disturbing.  But this is softened because the story is told with such beautiful prose.  Even the repeated use of the ‘n’ word and many other colloquialisms does not diminish the skillful use of language.

So when they met, first in those chocolate halls and next through the ropes of the swing, they felt the ease and comfort of old friends.  Because each had discovered years before that they were neither white nor male, and that all freedom and triumph was forbidden to them, they had set about creating something else to be.  Their meeting was fortunate, for it let them use each other to grow on.  Daughters of distant mothers and incomprehensible fathers (Sula’s because he was dead; Nel’s because he wasn’t), they found in each other’s eyes the intimacy they were looking for.

Referring to the evil days that followed Sula’s return to Medallion, here is the general attitude of the townsfolk.

What was taken by outsiders to be slackness, slovenliness or even generosity was in fact a full recognition of the legitimacy of forces other than good ones.  They did not believe doctors could heal – for them, none ever had done so.  They did not believe death was accidental – life might be, but death was deliberate.  They did not believe Nature was ever askew – only inconvenient.  Plague and drought were as “natural” as springtime.  If milk could curdle, God knows robins could fall.  The purpose of evil was to survive it and they determined (without ever knowing they had made up their minds to do it) to survive floods, white people, tuberculosis, famine and ignorance.  They knew anger well but not despair, and they didn’t stone sinners for the same reason they didn’t commit suicide – it was beneath them.

I found this book to be troubling and thoughtful on many levels.  The reading itself is very easy but the subject matter is not.  It prods and pokes and makes you uncomfortable.  But that is a good thing.  Complacence is not.   The characters are at once compelling and repulsing.  (Not repulsive, I hasten to add.)  You are drawn to their difficulties but wonder at their choices.
At under 200 pages, with well written prose, this is a very quick read and I can highly recommend it.