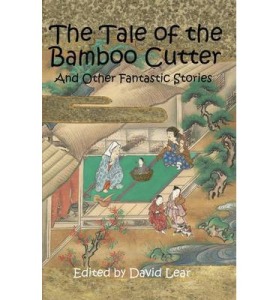 This is a very short folktale from 10th century Japan.  So short that it is rather hard to describe without telling you the whole tale.

At a whole 5 and a smidgen pages in length, in the only edition I could get my hands on, it had to share the book with stories from Cicero, Lucian and Voltaire amongst others.

Many of the motifs will be very familiar from folk tales and creation myths, far and wide.  It is also touted as one of the first, if not the first, science fiction story.

It starts with a poor bamboo cutter going about his daily work.  He and his wife have no children.  One evening, lo and behold, he sees a fabulous light shining nearby.  On investigation he finds a baby girl small enough to fit on the palm of his hand.  Naturally he takes her home and raises her as his daughter.  They name her Lady Kaguya.

Is this sounding familiar?  Lots of modern stories feature that particular motif, not looking at anyone in a funny suit and cape at all.

As she is not of this world we find that Lady Kaguya grows quickly (a few months) from a baby to a beautiful young woman.  Cue the romantic and quest section of the folktale.  Young men and their desire to see her beautiful face wears thin and in the end the bamboo cutter is left trying to dissuade only five noblemen.  Each is given an impossible quest.

Eventually the Emperor hears of her and requests that she come to the palace.  Unfortunately she will, apparently, die if she leaves the bamboo cutter’s home so the Emperor (bless him) comes to her.  Naturally, as folk tales go, he falls in love with her but she cannot leave her home and so he resigns himself to leaving.

After some time Lady Kaguya becomes pensive and sad whenever she looks up at the moon.  Eventually she explains that she is not from Earth, but from the Moon and is soon to have other Moon People come to take her home.

Mystified, her father asked her why she had come to Earth.  Lady Kaguya explained that there had been a great war on her world, and that she had been sent to Earth for her own safety.  Now that the war was over, she would have to go home.

And eventually this does come to pass.  Lady Kaguya’s people come down in a bright cloud, descend from a strange craft and with a little hey presto magic and an Elixir of Immortality she is whipped off back to her people.

I would not be exaggerating to say that it took longer to write this review than it did to read the tale.

To our modern ears the familiarity of extra-terrestrial beings as fictional characters makes it seem a small and unimpressive story, but in the context of 10th century Japan it must have been really quite radical to introduce other-worldliness into a tale.  If you find it in a book of folk tales, it is a nice way to see the beginnings of many themes that make their way through to modern science fiction.

3 thoughts on “The Tale of the Bamboo Cutter – Anonymous”