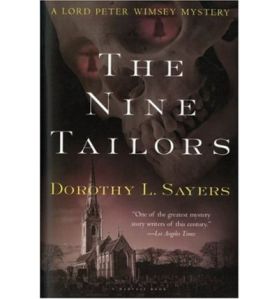 A goodly number of years ago I was mildly obsessed with 1920s and ’30s British crime fiction.  Specifically the grand dame, Agatha Christie.  When I had dispensed with her canon, I was left rather wondering what to do.  Thankfully for me, I learned about Dorothy L. Sayers and her creation, Lord Peter Wimsey.

I happily sat down to re-read The Nine Tailors recently and it was like walking in to a past world all over again.

The book opens with Wimsey driving his Daimler into a ditch on New Year’s Eve, having missed a rather nasty turn.  There is little else to do, but get out and walk in the miserable snowy landscape of the Fens, so that is what Wimsey and his manservant Bunter do.  They make their way to the village of Fenchurch St. Paul and become the guests of the local rector – Mr Venables – and his wife.

It turns out that there is something of an influenza epidemic going through the local populace and this threatens the good Reverend and assorted parishioners’ attempt at an impressive 15,840 Kent Treble Bob Majors.
The church of Fenchurch St Paul is a fine one, with eight bells.  Yes, this mystery is to be laid down in the most English of activities – change-ringing – and because of that I shall introduce you to the bells.

Naturally Lord Peter is a bit of a dab-hand at bell ringing and takes the place of the ill man – Will Thoday.  Nine hours of ringing later and the goal is achieved.  Sadly the wife of the local squire, Lady Thorpe, dies the next day and as a result of her death Wimsey is acquainted with the tale of the theft of an emerald necklace of a distant, wealthy, and eccentric family member some twenty years earlier.  The Thorpe family having been haunted by this unsolved and unresolved case ever since it occurred in their home.

While all this is going on Wimsey’s car is hauled out of the ditch and repaired.  He thanks the good Reverend for his hospitality and heads on to his original destination in Walbeach.

Some months later, just after Easter, Sir Henry Thorpe joins his wife in the hereafter and is due to be buried with her.  Unfortunately when the sexton, Harry Gotobed, and his son are preparing the ground they come across something rather unexpected in the grave.  A body.  Or as Harry refers to it when talking to Mr Venables, ‘a corpus’.

“Well, sir, it’s about this here grave. I thought I better come and see you, being as it’s a church matter, like.  You see, when Dick and me come to open it up, we found a corpus a-laying inside of it, and Dick says to me —”
“A corpse?  Well, of course there’s a corpse.  Lady Thorpe is buried there.  You buried her yourself.”
“Yes, sir, but this here corpus ain’t Lady Thorpe’s corpus.  It’s a man’s corpus, that’s what it is, and it du seem as though it didn’t have no right to be there.”

As you can see, Sayers has a lovely turn of wit, even with the discovery of the body.  It is this body that begins the mystery, and the Reverend requests Lord Peter’s aid and advice in Fenchurch St Paul over the matter of ‘the corpus’.  From here we follow the trail of the Wilbraham jewel theft in tandem with the murder investigation.  In the process we get to know a little more about a few key villagers and perhaps less appealing, we also learn a bit about change-ringing.  And as is nearly always the case with this genre of crime fiction, the hero solves the puzzle of the dead man and the missing emeralds.

I will be honest with you, the change-ringing jargon is quite hard going if you are not an aficionado.  Luckily it does not extend too much past the first few chapters of the book in any great detail.  Each section is begun with a nod to it, and there are more understandable references scattered throughout the remainder of the story.  The bells are almost like eight extra characters, showing up throughout the story.

The writing is crisp, clear and often full of sly humour.  The solution to the mystery is not given away too early, but lead up to, and yet the ending is not completely predictable either.  Here are two more examples of Sayers’ writing style and humour.  The first, when she is introducing the subject of change-ringing and elaborating on it.

By the English campanologist, the playing of tunes is considered to be a childish game, only fit for foreigners; the proper use of bells is to work out mathematical permutations and combinations.  When he speaks of the music of his bells, he does not mean musician’s music – still less what the ordinary man calls music.  To the ordinary man, in fact, the pealing of bells is a monotonous jangle and a nuisance, tolerable only when mitigated by remote distance and sentimental association.

The second occurs when the local policeman, Jack Priest, arrives on the scene of the exhumation of the unexpected body.

“Half a minute, half a minute, sir,” interrupted the policeman. “What day was it you said you buried Lady Thorpe, Harry?”
“January 4th, it were,” said Mr. Gotobed, after a short interval for reflection.
“And was this here body in the grave when you filled it up?”
“Now don’t you be a fool, Jack Priest,” retorted Mr. Gotobed. ” ‘Owever can you suppose as we’d fill up a grave with this here corpus in it? It ain’t a thing as a man might drop in careless like, without noticing.  If it was a pocket-knife or a penny-piece, that’d be another thing, but when it comes to the corpus of a full-grown man, that there question ain’t reasonable.”

So, if you enjoy the golden age of detective fiction but have not yet come around to Dorothy Sayers, then it’s about time you did.  It is a great read.

The title The Nine Tailors comes from an old tradition in small villages of ringing the church bell to announce the death of a person.  From Wikipedia:

In some parishes in England the centuries old tradition of announcing a death on a church bell is upheld. In a small village most people would be aware of who was ill, and so broadcasting the age and sex of the deceased would identify them. To this end the death was announced by telling (i.e. single blows with the bell down) the sex and then striking off the years. Three blows meant a child, twice three a woman and thrice three a man. After a pause the years were counted out at approximately half-minute intervals. The word teller in some dialects becomes tailor, hence the old saying “Nine tailors maketh a man”.