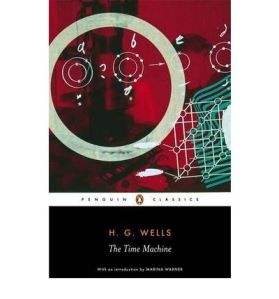 The Time Machine was first published in serial format in 1895 and was subsequently collated as a book.
This, to my embarrassment, is the very first of H.G.Wells’ works that I have read despite having seen many screen adaptations of his various stories since childhood.  It is a short work, my edition being 81 pages in total, and takes very little time to read.

The story starts with a weekly meeting of men over dinner in an unnamed scientist’s home.  Most of those attending are described by their profession.  The scientist himself is described as the Time Traveller.
The others are the narrator, who is never identified by name or profession; the Psychologist, the Provincial Mayor, the Medical Man, the Very Young Man, and a man called Filby. The discussion is about things scientific and especially the dimension of time.
One of the men states, “And you cannot move at all in Time, you cannot get away from the present moment.” To which the Time Traveller replies, “My dear sir, that is just where you are wrong. That is just where the whole world has gone wrong. We are always getting away from the present moment. Our mental existences, which are immaterial and have no dimensions, are passing along the Time Dimension with a uniform velocity from the cradle to the grave.”

As the conversation continues the Time Traveller then presents the men with a model – a metal framework containing ivory and crystal parts, the size of a small clock – which he proclaims to be his plan for a machine to travel through time. He then demonstrates it to the men, “We all saw the lever turn. I am absolutely certain there was no trickery. There was a breath of wind, and the lamp flame jumped. One of the candles on the mantel was blown out, and the little machine suddenly swung round, became indistinct, was seen as a ghost for a second, perhaps, as an eddy of faintly glittering brass and ivory; and it was gone – vanished!” After a small discussion the Time Traveller invites his guests to see the actual, full-sized, machine in his laboratory and states to the assembled group, “Upon that machine,” said the Time Traveller, holding the lamp aloft, “I intend to explore time. Is that plain? I was never more serious in my life.”

The men, unsurprisingly, are more than a little dubious of the scientist’s claims and leave for the night in varying senses of humour over the disappearing model and claims of the impending exploration of time.

The following Thursday evening the narrator travels again to Richmond and the home of the Time Traveller. By the time he arrives there are several fellows already present, the Medical Man, the Editor, the Psychologist, a quiet man and a certain journalist. The Time Traveller was absent but had left a note saying to begin without him should he not be there. Just as dinner is about to begin, in staggers a rough and tumble version of the Time Traveller, shocking those assembled. Like a good middle class Victorian, he throws back a couple of glasses of wine to revive himself and begs off to wash and dress for dinner. Upon his return he begins the remarkable tale of his journey to the future.

The journey takes him to the year 802,701 where he meets the “Eloi”, tiny and beautiful humans all alike.  He describes his experiences with the less enticing Morlocks. The story muses on the future of man and society, reflecting a late Victorian view of the rich and the poor or the upper and lower classes translated into a future decay. It also retains a measure of the adventure story about it; a brave traveller exploring new territory – in this case, the future – and despite the story aging it is still intriguing to follow the Time Traveller’s story to its end.

I found the novel to be incredibly easy to read.  Although by the end I thought perhaps he could and should have used the word “incontinently” a little less frequently. Also, naturally, over a century later many of the ideas are dated, but as an early science fiction story about time travel it is well written and certainly puts out the some initial ideas of utopia and even dystopia in the same small volume.

It is a quick and untaxing way to spend a few hours.