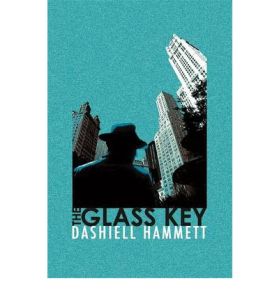 By now it is clear that I have become a great fan of Dashiell Hammett’s work, and having a two week holiday in which to indulge myself in his works has only continued to confirm for me that his writing is not only sharp, but varied as well.  The 1931 work, The Glass Key shows this beautifully.  No private detectives to be found here, not many sardonic, funny and sharp one-liners, instead we have Ned Beaumont – gambler and best friend to local political boss (and apparent business man) Paul Madvig.

The story opens with Ned and Paul discussing politics and the Henry family -the father being a Senator whom Paul intends backing for re-election.  Paul clearly also likes the daughter and is intent on marrying her.

A little later Ned finds the body of the senator’s son a couple of blocks down the street from Paul’s club.  The death of the young man, Taylor Henry, begins to pose real problems for Paul Madvig.  His daughter, Opal, was Henry’s girlfriend and she suspects her father of murdering him because he disapproved of the relationship.  The other political faction, represented by Shad O’Rory in the novel, start to make plenty out of the non-investigation of the lad’s death (courtesy of Paul controlling the local District Attorney’s office) and this is escalated by Paul’s boots and all attitude to dealing with O’Rory.

Ned Beaumont works hard to keep the election work on target, Paul out of the electric chair, and to get his money back from a dubious bookie.  Unlike Paul, who seems to have trouble seeing too far ahead, Ned is very much the thinker of the pair.  He sees that Paul is being set up and manipulated due to his infatuation with Janet Henry (Taylor’s sister).  So he works as Paul’s ‘fixer’ and through his interactions with the various characters we build up a picture of life in the underworld and back-door, influence-peddling politics of prohibition America.
I had never come across the term ‘political boss‘ before reading this novel, so for those unfamiliar with their role in late 19th and early 20th century US politics the power and role of Paul may be somewhat confusing – and he may simply be seen as a corrupt businessman with a hand in the speakeasy workings of his city.

I enjoyed reading this story, but for different reasons to the earlier works I’ve reviewed.  Unlike Red Harvest for instance, where the story is told from the point of view of The Continental Op, here the story is told from the outside and we are never given a look at the thoughts or feelings of the characters except as they play out in their actions and words. There was less murder and mayhem, but still plenty of violence and corruption.  At one point Ned is trapped by Shad O’Rory while trying to lay his own trap.  What happens to him as a result is brutal and in keeping with Hammett’s tough, no-nonsense approach to the violent lifestyle of the underworld gangsters of the time.  Realism is king here. Having been beaten senseless and worse, Ned shows his stubbornness in this passage that typifies Hammett’s descriptive style.

Ned Beaumont was tugging at the door-knob.
The apish man said, ‘Now there, Houdini,’ and with all his weight behind the blow drove his right fist into Ned Beaumont’s face.
Ned Beaumont was driven back against the wall.  The back of his head struck the wall first, then his body crashed flat against the wall, and he slid down the wall to the floor.
Rosy-cheeked Rusty, still holding his cards at the table, said gloomily, but without emotion: ‘Jesus, Jeff, you’ll croak him.’
Jeff said: ‘Him?’ He indicated the man at his feet by kicking him not especially hard on the thigh. ‘You can’t croak him.  He’s tough. He’s a tough baby. He likes this.’  He bent down, grasped one of the unconscious man’s lapels in each hand, and dragged him to his knees. ‘Don’t you like it, baby?’ he asked and, holding Ned Beaumont up on his knees with one hand, struck his face with the other fist.

By the time you have worked your way through the initial chapters, identifying characters and who they are to each other you will be hooked enough to keep reading to find out if Paul is Taylor Henry’s murderer, and just what Ned Beaumont is all about.  In the end, I spent several hours straight reading in to the night in order to finish this one up.  It became a case of not wanting to put the book down until I had the solution to the crime, and I must say I enjoyed the entire story.

Well worth the effort and definitely deserving of a place on the list. Highly recommended reading from me.
Happy Reading everyone.