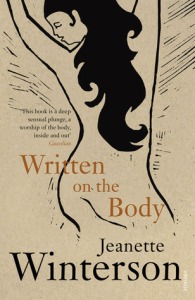 This is the second of four books by Jeanette Winterson to be reviewed here at the 1001 Books list.  The first was Oranges Are Not The Only Fruit.

Having read and reviewed Oranges nearly three years ago now, it’s been a while since I was last immersed in Ms Winterson’s prose.  And what prose it is!

What we do know about the narrator is that they are a lifelong philanderer, who has a disregard for marriage and a penchant for choosing to be *the other person* to married women.  After a particularly bad relationship experience with Bathsheba, the narrator’s dentist, they swear off their pattern of behaviour and choose a steady, unmarried partner – Jacqueline.

Unfortunately this does not work out well, both with the narrator’s temperament and then with the appearance of Louise, a pre-Raphaelite beauty from Australia.  They fall head over heels for this, once again, married woman.  The path ahead is not a smooth one, but the prose most certainly is.

Humorous passages are found when the narrator retells stories of previous lovers.

I had a girlfriend once who was addicted to starlit nights.  She thought beds belonged in hospitals. Anywhere she could do it that wasn’t pre-sprung was sexy.  Show her a duvet and she switched on the television.  I coped with this on campsites and in canoes, British Rail and Aeroflot.  I bought a futon, eventually a gym mat.  I had to lay extra-thick carpet on the floor.  I took to carrying a tartan rug wherever I went, like a far-out member of the Scottish Nationalist Party.  Eventually, back at the doctor’s for the fifth time having a thistle removed, he said to me, ‘You know, love is a very beautiful thing but there are clinics for people like you.’  Now, it’s a serious matter to have ‘PERVERT’ written on your NHS file and some indignities are just a romance too far.

And, of course you won’t want to miss a similar little story about the anarcha-feminist girlfriend, Inge, and her semtex.

But the vast majority of the novel is devoted to waxing lyrical about love, sex and sensuality.  Some is blunt, but most is carried away to intense descriptions of love, lust and admiration for a lover and their body.

I didn’t only want Louise’s flesh, I wanted her bones, her blood, her tissues, the sinews that bound her together. I would have held her to me though time had stripped away the tones and textures of her skin. I could have held her for a thousand years until the skeleton itself rubbed away to dust.

It’s a really interesting novel, especially the aspect of the un-gendered narrator.  For me, I found myself constantly wondering… were they male or female?  And then I found myself wondering… does it matter?  Even a week or so after finishing the book, I’m unsure that it does matter, but it certainly is something to think about.  Perhaps it is a gender parallel of the tendency to think of characters as white unless otherwise described in novels.  A tendency to need to box us in to our gender binary.

I’d love to hear what you thought of this novel and the ‘almost invisible, other than their thoughts and feelings’ narrator.

3 thoughts on “Written on the body – Jeanette Winterson”