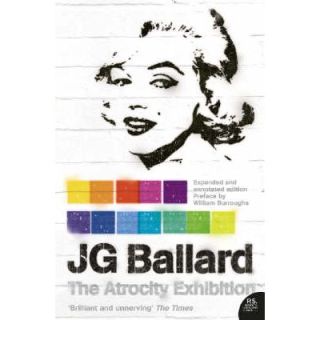 This book is just awful. I absolutely hated it. The author, to me, is trying to imitate Hunter S. Thompson and Joseph Conrad — and failing miserably. The gist of the book is that a doctor is having a nervous breakdown and the book is the inside of his mind’s ramblings. He is obsessed with violent images and especially the deaths of John F. Kennedy and Marilyn Monroe. He is mixing sex and bloody violence/dismemberment rather constantly and interchanging people and grotesque images. It is annoying. The book is written in a titled paragraph format that is extremely disjointed and off-putting. Allegedly, this book is to show a world controlled by advertising and pseudo-events, science and pornography, forming a disturbing newsreel of our unconscious (and seriously disturbed) minds. One particularly idiotic chapter is titled “Why I Want to Fuck Ronald Reagan” and “explores” whether more people want to have sex with Ronald Reagan if he had a vagina than just sodomising him. Apparently, Reagan’s facial tonus and musculature revealed characteristics associated with homoerotic behavior. (Pllllllleeeeeeeeeeeassse!) Another chapter, “The Generations of America”, is written like the book of the Bible of the endless “begats” and features literally pages of made up who shot who’s…. Awful. Another non- “memorable” chapter called “The Assassination of John Fitzgerald Kennedy Considered as a Downhill Motor Race”. This book is just crap. Skip it. Or give it as a gift to someone you have never liked and never want to see again. Ever.

This book, Wolfe’s first novel, is about New York City in the 1980s and the excesses of Wall Street where the players titled themselves the “Masters of the Universe”. But it is much more than that. There are four main characters to the story — a white millionaire bond trader, a Jewish Assistant District Attorney, a British ex pat alcoholic journalist and a black activist. It is a story about class and racism, wealth and poverty, ambition and downfall, over-reaching and lies.

The white trader and his mistress are out one evening and mistakenly venture into a rough section of the Bronx where they find the highway exit blocked by trash. The trader and his mistress exit the car to clear the highway and they are approached by two young black men who are perceived as predators. Upon racing back to the car, the mistress takes the wheel. The speeding car fishtails and strikes one of the young black men, sending him to the hospital in serious condition and launching a racially tainted hit and run media circus.

That circus is fuelled by the black activist and British journalist, with the Jewish Assistant DA sensing his chance at a high profile case that could assist his boss’ re-election. The mistress flees the country and the trader is arrested for hit and run. There follows all of the machinations of events leading up to a keenly anticipated trial. The trader faces demonstrators against racism and classism outside his pricey residence. He wears a wire in order to record the truth about who was driving the car from his mistress who has returned to the country for the funeral of her husband. It all results in a dismissal of the case due to tainted evidence. The second trail results in a hung jury, split along racial lines.

But the journalist wins the Pulitzer Prize, the Jewish Assistant DA loses his spot on the prosecution, the hit and run victim dies, the trader loses a civil case to the victim’s family, resulting in a $12 million liability, and the mistress re-marries. The former “Master of the Universe” is rendered penniless and estranged from his wife and daughter, awaiting trial for vehicular manslaughter. What goes up comes down.

It is a good book and was very popular when it came out in 1987. Tom Hanks starred as the trader in the film version in 1990, with Kim Cattrall as his wife, Melanie Griffiths as his mistress and Bruce WIllis as the journalist. The film was a commercial and critical flop.

This is a classic which would have been better enjoyed by my sister who loves Dickens. I found it very hard to “get into”, due to Dickens’ language usage and long narrative style. As a result, it took me much longer to read this 370 page book that it should have taken. However, once I got used to the style and language (and the story picked up), I finally began sailing through and finished it quickly (from about page 200 onwards). It is the tale of the French Revolution nearly two hundred and fifty years ago, so the “two cities” are London and Paris. It is said that Dickens never understood nor liked Paris and loved no city except for his own London, having been born within the sound of Bow bells and, therefore, a Cockney. He does, however, capture the truly terrible human madness in the streets of the French Revolution resulting in the insatiable thirst of Madame Guillotine. It reminded me of many other dark historical times all across the world when one never knew who would be accused and taken away in the night, to be executed after a kangaroo court trial the next day. Dickens uses splendid language to describe the all too human bloodthirsty impulses of mob mentality and how this particular cruelty rears its massive head whenever and wherever events of the day cause a disintegration of the controlling governing forces of a country or region or singles out a scapegoat. It is said that Dickens’ simplicity as a Londoner always and only and his lack of studying the French Revolution in any depth gave him the literary freedom to write convincingly about the human tides which swept France, brutally butchering any and all in its way, for Liberty et Revolution! He is a genuis at describing people in such perfect detail to make them come alive in the pages. He encased Madame Defarge, for example, in a frightening and solid unswerving power which is only explained in the final pages of the book. Whenever he writes of her, you almost feel a chilly wind go through you — a strong instinct to be careful around her with her dangerous watchful silence and infernal knitting. I came to very much enjoy Dickens’ combinations of words to give the reader an immediate feeling for the person described and an understanding of the situation at hand. For example, when one character is uncomfortably confronted by another who the first has deceived for a very long time, Dickens describes the unease of the trapped rogue thusly: “…he changed the leg on which he rested, as often as if he had fifty of those limbs and were trying them all; he examined his fingernails with a very questionable closeness of attention…[and] he was taken with that peculiar kind of short cough requiring the hollow of a hand before it, which is seldom, if ever, known to be an infirmity attendant on perfect openness of character”.

We all know this book by its opening line: “It was the best of times, it was the worst of times, it was the age of wisdom, it was the age of foolishness, it was the epoch of belief, it was the epoch of incredulity, it was the season of Light, it was the season of Darkness, it was the spring of hope, it was the winter of despair, we had everything before us, we had nothing before us, we were all going direct to Heaven, we were all going direct the other way — in short, the period was so far like the present period, that some of its noisiest authorities insisted on its being received, for good or for evil, in the superlative degree of comparison only.” It is the tale of two cities and Dickens is miraculously able to describe the people and events of the city so foreign to him actually better and with more true feeling than the rather bland events of his beloved home city.

This is a book that I had always MEANT to read and I am glad that I was finally “forced” to do so. It is worth the time that it takes to fall into its style and story line.