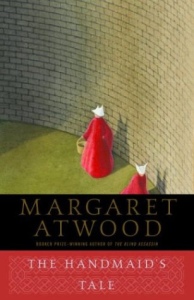 The Handmaid’s Tale is a dystopian novel, published in 1985, which won the Arthur C. Clarke Award and the Governor General’s Award.

The setting is the near future in the USA.  Our narrator is a Handmaid called Offred.  We are introduced to the current state of the world through Offred’s eyes, and via her memories in flashback we are given glimpses of how the USA becomes the Republic of Gilead.

Following a bloody coup the government of the USA is taken over by a group called the ‘Sons of Jacob’.  This signals the beginning of a strict, military based theocratic society.  Offred is old enough to remember what life was like prior to the coup when she had a husband, a daughter and a job.  By the time the narrative of the story begins that life is a thing of the past, and she is now a Handmaid valued only for her functioning ovaries and reproductive abilities.

Society is now defined by roles and women are now kept uneducated and forbidden to read. They are now totally under control of the state with pretty much no rights, even to the point of being assigned to men.