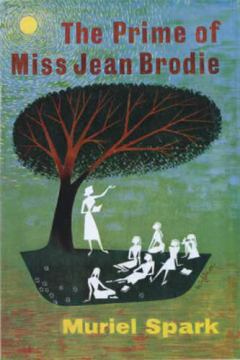 It is the 1930s and Miss Jean Brodie is a teacher at the Marcia Blaine School in Edinburgh, a traditional all girls school and all that being a traditional all-girls school in the 1930s entails. Miss Brodie however is far from the conventional teacher one would expect of Marcia Blaine. When a group of 10 year old girls are assigned to Miss Brodie, she sets out to give them an education of her own fashioning, that is not necessarily based on any school curiculum but that of her life and her interests. For the following eight years at Marcia Blaine, “Brodie’s Set” continue to be tutored and influenced by Brodie in her efforts to make them the crème de la crème of their generation.

Do not be fooled by this familiar sounding premise, this is no Dead Poets Society.

In Miss Brodie, Muriel Sparks has created a unique character. Brodie’s cause is a noble one, the moulding of a child’s mind to think against the current norms, to see beyond what society dictates for you, particularly that of a female at that time. But there is a self-obsessed and manipulative woman beating at the heart of this story. And moulding is the key word, because it is in her image that Brodie wants to make these girls. There seems to be some division amongst readers of whether Brodie is a heroine or something more sinister and I definitely fall in the latter category. Yes, she is to be admired for her free-thinking and encouragement of the girls to embrace more. But at times she is unnecessarily cruel, she holds one girl at fault more than the others, and she places importance on the physical beauty of another. Her idea of education is what she deems important; art, classical studies, drama while ignoring maths and science. And as the girls become older, she begins to use them as pawns in her life, particularly her love life.

Sparks also has an interesting approach to the timeline. We are introduced to the girls as they are at 10 years old but also as they are as adults, looking back on their time with Miss Brodie, at the same time. In Spark’s hand, this never becomes clunky but played into clever foreshadowing as we learn about a betrayal of Brodie by one of the girls. So, from early on we know of what has happened, but it is the why and the how that needs to be discovered.

So interesting characters in Miss Brodie and a number of the key girls in the Set. Interesting plot; I love a bit of underhanded manipulation. Interesting, non-linear approach to the temporal aspect of the story. So why didn’t I like it?

I grabbed this as another quick read (I had The Walking Dead compendium waiting for me, judge me not) and I found it hard going. Spark has a sparseness of prose in some aspects but a repetitiveness in others, that in combination left me cold. Miss Brodie was in her prime. The title told me, Miss Brodie told me, most of her Set also told me. And what I can only guess (being that of your humble, everyday plebian reader) was an attempt at ensuring each of the Set was easily pictured and remembered, their characteristics were repeated ad nauseum; Rose is sexy, Sandy has small eyes, Eunice is good at gymnastics. I got it and then got over it very quickly.

To be fair, these are only minor gripes, particularly when they are held up against some pretty sterling reasons why this book is on the list, and if you look at the era that it was set in and the era it was written in. Writing reviews for this blog has given me greater appreciation for the books I read, making me look at things other than just the entertainment I derived from them. But sometimes you just don’t like something no matter the amount of introspection you apply or sound logic there is as to why you should.

So, a purely personal rating of 2 out of 5. And I am well aware of this being somehow a failing on my part rather than that of Muriel Spark. She has another three books on the list and dozens more that are not, so I am willing to give it another go with Ms. Spark. We will have to see if our relationship extends beyond that.