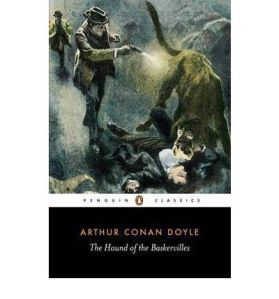 I purchased this in the Puffin Classic volume amongst a group of other classics for my children, and have just picked it up and re-read it.

We start the story with the trusty pairing of Holmes and Watson in their rooms discussing the walking cane of one Dr Mortimer who had paid a visit to them the previous night while they were out.  This gives us an introduction to Holmes’ deduction methods right from the start of the story and how he is able to out-think his companion.

Dr Mortimer duly arrives as they end their discussion of the stick and he starts us off on the chase for The Hound of the Baskervilles.  Bringing news of the death of Sir Charles Baskerville and the family legend of a devilish hound on the moors, Mortimer invites Holmes and Watson to meet and decide how to help the newly arrived heir from North America.

Thereafter we follow the adventures of Watson as he reports the goings-on from Baskerville Hall, involving the neighbours, an escaped convict and the dark and dangerous moor itself.  And naturally we reach a resolution and all is explained about the devilish howling, the evil dog and the sinister plot that brings danger to Sir Henry Baskerville at the very last.

I was very pleased to re-read this story some {ahem} decades after I first ventured into the world of Sherlock Holmes as a young reader.  I was happy to see that it had lost nothing in the intervening years, as can often happen with books one enjoyed as a child.  Interestingly I found this story rather debunking of the superior and condescending attitude of Holmes that comes out in any non-book adaptation.  While he is not shy to say how well he does there are plenty of times where he praises Watson, and it does not read to me as arrogance or condescension.

Here is an example of Conan Doyle’s writing style, describing the moor.

All day today the rain poured down, rustling on the ivy and dripping from the eaves.  I thought of the convict out upon the bleak, cold, shelterless moor.  Poor fellow! Whatever his crimes, he has suffered something to atone for them.  And then I thought of that other one – the face in the cab, the figure against the moon.  Was he also out in that deluge – the unseen watcher, the man of darkness?  In the evening I put on my waterproof and I walked far upon the sodden moor, full of dark imaginings, the rain beating upon my face and the wind whistling about my ears.  God help those who wander into the Great Mire now, for even the firm uplands are becoming a morass.  I found the Black Tor upon which I had seen the solitary watcher, and from its craggy summit I looked out myself across the melancholy downs.  Rain squalls drifted across their russet face, and the heavy, slate-coloured clouds hung low over the landscape, trailing in grey wreaths down the sides of the fantastic hills.  In the distant hollow on the left, half hidden by the mist, the two thin towers of Baskerville Hall rose above the trees.

If you have not dipped your toes in to the original written world of Holmes and Watson, then you can do no better than start with one of the most well known stories.  I did not find it a trial to read.  It is a straightforward tale of mystery and intrigue, told in an easy to read style.  I think it deserves its place on the 1001 Books and not only due to the mystique grown up around the unique character of Sherlock Holmes.