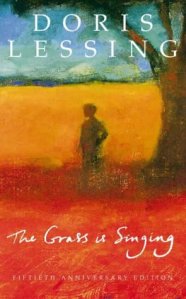 The Grass is Singing is Doris Lessing’s first novel, and it is fantastic. It chronicles one woman’s psychological disintegration in the context of poverty and white rule in 1940s and 1950s Southern Rhodesia. This woman is Mary, who grew up poor (hating her father, watching her mother suffer) and as a young adult has a good secretarial job, and a decent single life. Mary marries Dick Turner and becomes suffocated and depressed by her new life on a poverty-stricken farm with a man she doesn’t love. Over the years, both Mary and Dick weaken and become more and more frustrated and ill, leading up to the murder that frames the novel at its beginning and end. This heartbreaking story is embedded in a swirl of social, racial and gender tension and inequality. In 1950s Southern Rhodesia, white rule is in full force, and the pressure of fulfilling her gender role leads Mary into her miserable situation in the first place.

If you’re looking to read something light and fun, this isn’t it. But it will expand your literary horizons and open your eyes. The Grass is Singing is a compact and powerful story that makes clear how destructive racial and gender inequities without becoming a treatise and nothing more. Lessing demonstrates right from the start of her career her amazing talent for intense prose that is thought-provoking and cuts like a knife.

I was really impressed by the way Lessing weaves social criticism of race relations and social expectations (i.e. women marry and bear children) at the time into a deeply psychological narrative. Both Mary and Dick are sympathetic characters, and both are fraught with ugly flaws especially, but not only, when it comes to race relations. Both Mary and Dick completely fall apart over the course of the novel. Dick becomes nervous, frustrated and miserable, which doesn’t help his inability to complete anything he starts. Mary becomes a mere shell of herself – spending hours staring at the wall in a deep depression.

The Grass is Singing is a closely attuned depiction of the destructive power of socially-mandated hatred and expectations. My edition also included a supplement at the end with Doris Lessing’s Nobel Prize for Literature acceptance speech. It is fascinating! She discusses how in Africa people yearn for books and literature and education, even when they’re hungry and exhausted. She also talks about how these places are the future of literature – great writing comes from experiencing hardship and we in the western world have pretty easy lives.

2 thoughts on “The Grass is Singing – Dorothy Lessing”