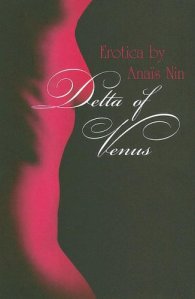 At the time we were all writing erotica at a dollar a page, I realised that for centuries we had had only one model for this literary genre – the writing of men.

The preface of Delta of Venus is taken from Nin’s The Diary of Anais Nin, Volume III, and explains how she came to create this collection of erotica.  Through her famous friendship with Henry Miller, she is encouraged to start contributing to Miller’s collection of stories for a book collector.  When she forwards her stories she is told to “…cut out the poetry and anything but sex.  Concentrate on sex.”  She continues to submit them, the stories becoming more “outlandish, inventive and exaggerated.”

What starts as a need for money to fund her and her literary friends lifestyles, the final postscript of this preface, added over thirty years later, sees a more philosophical Nin.  Here she discusses the difference between Henry Miller’s masculine approach to the project and her feminine  poetic approach.

I had a feeling that Pandora’s box contained the mysteries of woman’s sensuality, so different from man’ and for which man’s language is inadequate.

Thus, Delta of Venus was born.  Female written erotica is a hot topic at the moment due to the popularity of a certain trilogy.  Much speculation and equal parts love and scorn have been heaped upon E.L James Fifty Shades Trilogy, which having not read I can not comment on.  What is of interest is that it is erotica (apparently in the tamest sense of the word, but again, I shouldn’t even comment) written by a woman for women and it has tapped into something that appears to be lacking.  There is a wealth of erotica that is written by women but not as accessible or as mainstream as their male counterparts.  So at the very least, this book and its authors comments about it, make it very relevant over 60 years after it was written.

And so, to the stories themselves.  What elevates Nin’s writing here is the very thing that the book collector complained of; the poetical, lyrical feel to these make them beautiful.  The words themselves feel sensual, the tone so fitting with the subject matter elevating it from lurid and seedy.  By her own admission, to combat the complaints over being over-poetical, there is a lot of boundary pushing here.  Necrophilia, incest, rape and bestiality all feature here and it does make for uncomfortable reading.  You admire how it is written and why it is being written but it is not an easy read.  A lot of this can be rationalised by the preface, but still, you know, icky.  Now, that isn’t a familiar word from me, is it?