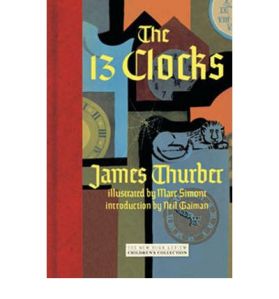 Well goodness me.  This little book was a surprise.  Firstly I was not expecting to be wandering around the children’s section of the library to find it and secondly I did not picture children’s tales in amongst many of the works on the 1001 lists.

The biggest and most wonderful surprise though was the writing and wordplay.  I loved it.

The 13 Clocks is a fantasy tale, with lots of fairy tale standards.  There is the evil Duke, his captive niece the Princess, a wandering Minstrel who is a Prince in disguise and then there is the mysterious stranger, the Golux, who helps ensure a happy outcome.

The Duke is paranoid, wicked, cruel, limps, wears an eyepatch and a monocle.  All things you expect in a good fairytale villain.  He also believes that he has slain time, with all 13 clocks in his castle stopped at ten to five.  How Thurber describes this is wonderful.

The clocks were dead, and in the end, brooding on it, the Duke decided he had murdered time, slain it with his sword, and wiped his bloody blade upon its beard and left it lying there, bleeding hours and minutes, its springs uncoiled and sprawling, its pendulum disintegrating.

The Prince in the story arrives disguised as a minstrel, but is soon exposed and challenged to meet an impossible task or forfeit his life.  He first hears of the Princess Saralinda when he enters the town beneath the castle.

At the sign of the Silver Swan, in the town below the castle, where taverners, travelers, taletellers, tosspots, troublemakers, and other townspeople were gathered, he heard of Saralinda, loveliest princess on all the thousand islands of the ocean seas.

You have to smile at a book in which you find the word tosspot, which although genuinely appropriate in this context with its original meaning and possibly for the 1950s when The 13 Clocks was written, but now has something of a different tone in usage.

And while you are smiling, perhaps a short paragraph about the Duke’s spies.  He introduces them to the newly exposed Prince Zorn.

The Duke sat staring at a man who wore a velvet mask and cloak and hood.  “This is Hark.” he said,”and this is Listen.”  He gestured with his cane at nothing.
“There’s no one there,” said Zorn.
“Listen is invisible,” the Duke explained.  “Listen can be heard, but never seen.”

Then there is the Golux, a little man who claims to aid the prince and princess.  He comes out with some confusing, characterful statements.

His rambling passages are definitely the oddest and quirkiest in this little tale, there can be no doubt of that.  For instance, he recites ditties or short poems to entice one of the characters, Hagga, to laugh.

“There was an old coddle so molly,
He talked in a glot that was poly,
His gaws were so gew
That his laps became dew,
And he ate only pops that were lolly.”

But Thurber is wonderfully tongue in cheek throughout.  Golux introduces himself to Zorn in this way,

“I am the Golux,” said the Golux, proudly, “the only Golux in the world, and not a mere Device.”

And at the very end when all is coming to its Golux induced conclusion, the Duke turns to the Golux and says,

“You mere Device!” he gnarled.  “You platitude !  You Golux ex machina!”

I found the writing to be captivating.  Part prose part poetry.  There is an internal meter to the writing that you can hear as you read the book.  As it was unexpected I found myself re-reading passages to see what was going on.  As the wikipedia entry kindly points out, there is the “use of an almost continuous internal meter, with occasional hidden rhymes — akin to blank verse, but with no line breaks to advertise the structure.”

Throughout the book you are having words thrown around this way and that, but it works.  It works wonderfully.

The brambles and the thorns grew thick and thicker in a ticking thicket of bickering crickets.  Farther along and stronger, bonged the gongs of a throng of frogs, green and vivid on their lily pads.  From the sky came the crying of flies, and the pilgrims leaped over a bleating sheep creeping knee-deep in a sleepy stream, in which swift and slippery snakes slid and slithered silkily, whispering sinful secrets.

But you must read it.  Really you must.  It is unusual, possibly unique if we agree with Neil Gaiman’s closing words to his introduction, “it’s the only one there ever was.”  You must find out what your zatch is and where your guggle may be found.  It is a mere 124 pages of large print long.  I, the slowest reader of your acquaintance, knocked it off in a mere couple of hours.  If I have misled you and you do not enjoy Thurber’s wordplay, then you have only given up an hour or so of your life.  Feel free to return and berate me in the comments for it.