REVIEWER: T, OF AS LONG AS I’M SINGING 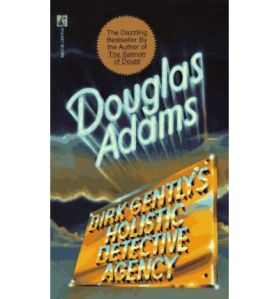 “This was the evening of the last day of Gordon Way’s life, and he was wondering if the rain would hold off for the weekend.”

If Dirk Gently’s Holistic Detective Agency is the first Douglas Adams book you’ll ever read, then I would highly recommend that you first put that damned thing down, and pick up either “Hitchhikers…” or “Tea Time…” before giving this one a go. In fact, it’s for this very reason that I reviewed it last of all the Douglas Adams entries that I was tasked with (volunteered for) for 1,001 Books To Read Before You Die.

Don’t get me wrong, this is a wonderful read, but of all of his books, it’s the one that requires the most concentration. Throughout it, he pushed the boundaries on the idea of the “holistic” nature of Dirk’s work, and as such, there’s a fair share of story strands to be mindful of. Hell, I had to read the 1st chapter alone some five times before deciding that I simply wasn’t built to understand it. Not without first reading on, in the hopes that somewhere deeper within the book, illumination would come.

It did eventually, but not until almost the very end.

In addition to Mr. Way’s dying (an event that doesn’t serve to silence his participation in the pages that follow, mind you), we’re also faced with his best friend who finds himself somewhat brain-washed; his sister, who finds herself one of the few strong characters in the story; an eccentric (read: straight out batty, but not nearly as mad as all that) college professor; a time machine; something called an electric monk (a simply delightful invention, by the by) and an eternal ghost. One that has plagued us, as it turns out, for a very stupid yet vital reason throughout the entirety of the planet’s existence. And, oh, there’s a missing cat as well, of course.

According to the big wide world of wikipedia, this story was born out of two screenplays Adams wrote for the Doctor Who television series. As such those of you who are of the Whovian persuasion will not be disappointed. And those of you, who are of an Adamsian persuasion, may see your way to tuning into the Doctor for a spell, unless of course, Whovians and Adamsians are already one and the same? I’ve no idea if they are. I mean, I know I am – but I hardly ever count myself as being indicative of the norm.

At any rate, of all the books I’ve read twice in the entirety of my lifespan, this is one of the few that I did so merely in the hopes of understanding it the second time around. Well, understanding it better than I did with the first pass through, at any rate. Again, don’t get me wrong, it is a very good book, and one I’m proud to have on my bookshelf (well, it’s more along the lines of a bric-à-brac shelf, containing not only the book – along with several others – but a Fred Astaire Christmas doll, a personalized Las Vegas lighter/bottle opener and a Nunzilla wind-up sparkler). Wonderfully written, and chock full of all the usual wordsmithing that you would expect from Mr. Adams, these three hundred and six pages entertain in a mind-bending fashion, and while the story gets us acquainted with several of the characters (though oddly, not as strongly as he did in “Hitchhikers…”) that remerge in “Tea Time…” this tale is by no means a preemptive retread of that second tale.

As this will be – by all reports – the final book review that I’ll be posting for 1001 Books To Read Before You Die, I’m sure that I’m shortcutting this review quite a bit in the process. As such, and in order to not make reading this a total waste of your time, I thought I would include in parting, one of the review blurbs that can be found on the back cover of my paperback copy. One from the Philadelphia Inquirer that, in sixteen short words additional to the title, summed up the whole of this novel (and possibly Douglas Adams’ entire fictional career) far better than I ever could:

“Dirk Gently’s Holistic Detective Agency by Douglas Adams is the skateboard on which the thinking person plays hooky from the universe.”

I hope that one day (rainy or otherwise) you’ll decide to take the time to “skip class” for a spell, and get acquainted with both Dirk and Douglas.