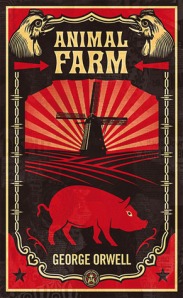 There are not many unfamiliar (well, many readers) with this allegorical tale of farm animals rising up to overthrow their human owner and install a new regime in which all animals are equal and whatever goes upon two legs are the enemy.  With clear lines able to be drawn from this novel to the Russian revolution and the rise of Communism and Stalin, this novel has long been a popular staple of English curricula the world over.

Old Major, the ageing prize winning boar, calls all the animals of Manor Farm to a meeting, where he tells them of his thoughts on how animals are unfairly treated, that they are slaves to unworthy humans. When Old Major dies, his message is taken up by some of the younger pigs, who rally the animals into action, rising up against their particularly inept farmer and claiming the farm as their own.  With the pigs behind the brains of the operation, the animals successfully make the farm their own, creating Animalism, a mandate that follows seven commandments;

However, this idealism is short lived and not all continues on in Animal Farm as initially hoped for, especially when some animals become “more equal” than others.

Written in 1945, Animal Farm is of a certain time and yet timeless in what it is trying to say and how it is being said.  Criticised at the time for being too heavy handed in its obvious views on Communism, particularly Stalinism,  by its author, this novel is short and clearly written.  This direct allegory allows for easy identification of its themes, even specific historical figures and events, making this ideal for younger readers and an obvious choice for English teachers.

Having never had to read it in this environment, I did not suffer for having to analyse and nit-pick at it over  a few months.  I was drawn into the story, sympathising with the well defined characters; rallying with them against their human oppressors, becoming horrified at the actions of the pigs as the story progressed.  I was entertained and enjoyed the time I spent in this  fable.  I will be passing it on to my 13 year old son to read, not knowing if it will be in any of his English classes as a set text, but I will be brushing up on my Russian Revolution knowledge.

Beasts of England is the rallying song of the animals movement.  I am off to see if I can find a youtube clip of it.

Soon or late the day is coming, Tyrant Man shall be o’erthrown, And the fruitful fields of England Shall be trod by beasts alone.

Rings shall vanish from our noses, And the harness from our back, Bit and spur shall rust forever, Cruel whips no more shall crack.

Riches more than mind can picture, Wheat and barley, oats and hay, Clover, beans and mangel-wurzels, Shall be ours upon that day.

Bright will shine the fields of England, Purer shall its waters be, Sweeter yet shall blow its breezes On the day that sets us free.

For that day we all must labour, Though we die before it break; Cows and horses, geese and turkeys, All must toil for freedom’s sake.