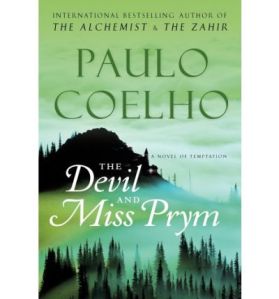 This is the first novel by Paulo Coelho that I have read. I was aware of The Alchemist, but had somehow managed to get the idea into my head that Coelho was a “spiritual” type of writer. Also known as a bit “hippie”.

It is certainly true that spirituality is core to this story, but it cannot truly be said to be “hippie”. The Devil and Miss Prym is set in the village of Viscos and is a story of good versus evil and the temptations presented to us in life. Chantal Prym is a disaffected young woman who has lived in the village all of her life. She is pretty much the only young person left and like her peers she wants to leave for a better life elsewhere.  She works as a barmaid in the local hotel where visitors come for the hunting season and she often dreams that one of them will take her away for the repetitive life she leads. Berta is an old woman who’s husband died fifteen years before in a hunting accident and has sat at her door watching the village and the countryside ever since. She has sat, waiting, for evil to arrive in the village.
Finally, one day, it arrives.

A stranger arrives in the village and uses Chantal to propose an unthinkable act to the villagers in return for bars of gold and the future security of the village which has been dying slowly.   The story plays out the stranger’s scheme to test his idea of good and evil. In the process he drags both Chantal and Berta right into the heart of it all.

I love the easy flow of the writing and the ideas. I wanted to keep reading to see what would happen.  Would good or evil win?
The imagery was very nicely done too. For instance, gallows as conscience:

‘Ahab really understood human nature: it isn’t the desire to abide by the law that makes everyone behave as society requires, but the fear of punishment.  Each one of us carries a gallows inside us.’

Then there is judgement:

He found one of the most interesting descriptions of this punishment in an Arabian book: there it was written that once the soul had left the body, it had to walk across a bridge as narrow as a knife edge, with paradise on the right and, on the left, a series of circles that led down into the darkness inside the earth.  Before crossing the bridge (the book did not explain where it led to), each person had to place all his virtues in his right hand and all his sins in his left, and the imbalance between the two meant that the person always fell towards the side to which his actions on Earth had inclined him.

A little further on he also goes on to say this:

The Chinese were also the only ones to offer a convincing explanation of the origin of devils – they were evil because they had personal experience of evil, and now they wanted to pass it on to others, in an eternal cycle of vengeance.

The whole debate over man’s inclination to be good or evil was very interesting and I completely agreed with his summing up at the end of the novel.  I won’t end my review with a spoiler, so you’ll just have to read the book to see if you agree with us.  I do think the novel had some weaknesses especially around the responses to temptation, but it didn’t particularly spoil it as a good read.  I can recommend this for a good, light read.  It was only 200 pages and I finished it in three evenings.

One thought on “The Devil and Miss Prym – Paulo Coelho”